Baka to Test to Shoukanjuu (バカとテストと召 喚獣, lit. Idiots, Tests, and Summoned Beasts) is a light novel written by Inoue Kenji and illustrated by Haga Yui. It was first released on January 29, 2007 and has seen a total of nine written volumes. On October 30, 2009, the series was adapted to manga. The anime adaptation was soon released and began airing on January 7, 2010 with a total of 13 episodes. Second season is under development and will be released soon.

There is an opening and two ending themes:

Protagonist Yoshii Akihisa is Fumizuki Academy’s certified idiot / “Baka” – hence the title of the series. The school and staff are stringent in dividing the students based on their academic performance. Students are sorted into classes ranging from A to F based on their entrance exam scores. Class A has only the élite students, and their classroom reflects their high standards, while Class F doesn’t even have proper desks and chairs, as the students resort to using orange boxes as desks and flattened sitting cushions for seating. 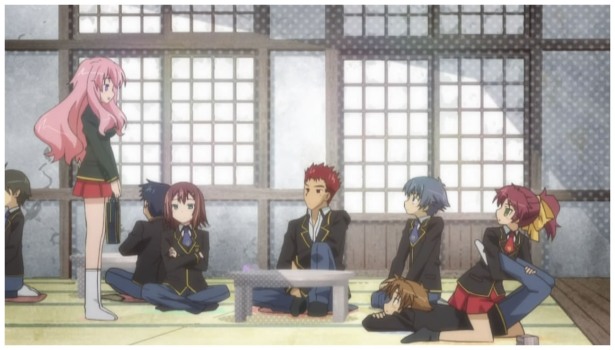 Akihisa, together with the rest of his F-Class classmates are embroiled in Summoned Being Wars for many reasons. For Akihisa, it is to get intelligent girl Himeji Mizuki back into the class where she belongs (Class A) since she failed her entrance exam miserable after falling sick. The others, like class rep Sakamoto Yuuji, just wants to prove to others that there are more to life that just being book smart. Perverted ninja Kouta Tsuchiya, bishounen Hideyoshi Kinoshita and tomboyish Shimada Minami just want privileges that goes along with winning each war. 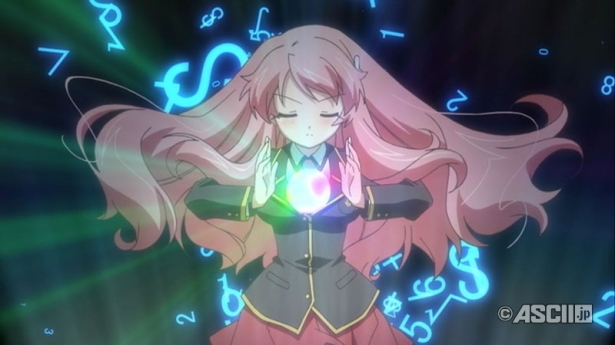 Mizuki summoning her Being

Aside from this caste system, the students of the academy can also conjure up Summoned Beings (Shoukanjuu). The Beings are used for battles between classes to up each other’s standings. The state and prowess of each Summon Beings is based on the knowledge of the Being’s owner. 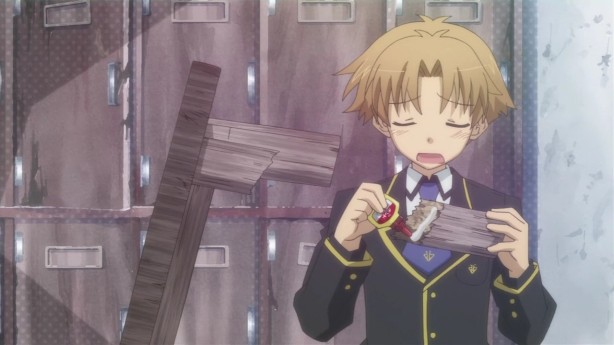 Class F, being the worst academic grade has also the worst facilities – they started with rickety tables, followed by upturned mandarin orange boxes and finally to large clipboards with only a rope to hold it up. One-third of the academy’s population resides in this class, with 48 male students and only 2 female students – two of whom have their eyes set on Yoshii Akihisa, the stupidest but the sweetest of the lot. Ironically, Akihisa is not lacking in the love department.

Himeji Mizuki, has loved Akihisa since the day of her placement exam where he stood up for her after she became ill and resulted in her placing in the worst class in school. Fortunately for her, she really is a very intelligent person, but is happy with her class placement as Akihisa is also in the same class. Her earnestness, intelligence and cuteness are her saving grace, as she cannot cook to save her life. Once, she almost kills/poisons Akihisa and his friends with her baking. This was later used as an arsenal for their Summoned War against other classes. 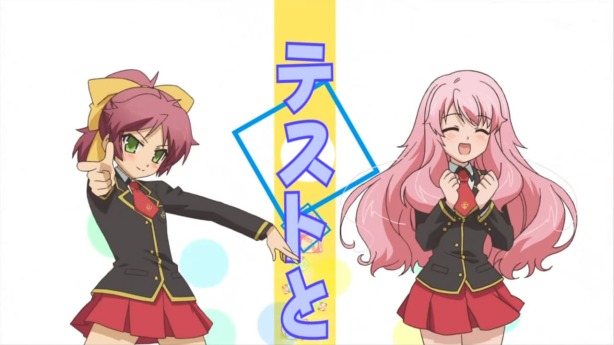 The other love interest of Akihisa is Shimada Minami, whom Akihisa claims as his worst enemy as she is constantly wrestles him and beats him up. Being a transfer student from Germany, all her subjects are greatly handicapped by her inability to properly read kanji. As a result, she only excels in math, but is still hampered when kanji appears in the questions. As she is athletically built, she lacks in the breast area, often comparing herself with Mizuki’s ampleness.

Minami’s younger sister in Grade 5, Hazuki, has also staked her claim on Akihisa, naming herself as his future bride even though she regularly calls him Baka na o-ni chan (idiotic elder brother).

Another paramour of Akihisa and the most unlikely subject is Kubo Toshimitsu the number 2 of Class A. Because he easily misinterprets situations, he thinks Akihisa has a crush for him.

The worst of the lot, is Akihisa’s 23-year-old Harvard grad elder sister Akira. She constantly flaunts her E-cups at him and even eggs him on by suggesting creepy situations with him like taking baths together. While she is extremely smart, she is a hopeless cook as evident in her failed attempts at making Paella for him while he studies. Akihisa, however, even though an idiot, has some skills in cooking.

Class F is led by Sakamoto Yuuji, who really is quite an intelligent person and has the foresight to predict and strategize their war plans. His war tactics are well-organized, utilizing each and every student’s abilities (or disabilities) to its fullest potential. Class wars are waged and won, and with each win against the classes above them, Class F forgoes the loser’s classroom and better equipment. Instead, they take the promise of allegiance from the losing class and calls upon it when needed. 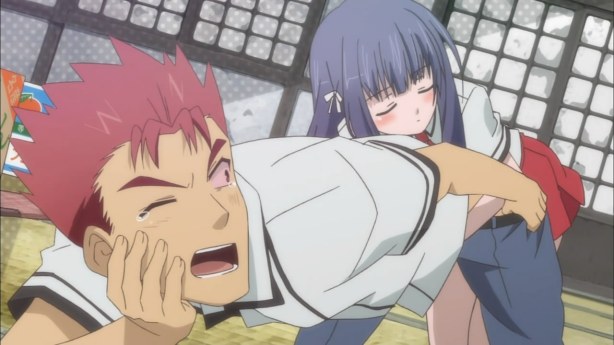 Yuuji & Shouko - as she takes out his eye after it wanders

Unfortunately (or fortunately) for Yuuji, he is loved by Class A’s class rep and the school’s most revered and intelligent girl, Kirishima Shouko. Even though she is soft-spoken, she is highly assertive especially when it comes to knowing what she wants with Yuuji. He is not allowed to see other girls and even has him on a tight noose bound towards the wedding altar. He, however, doesn’t seem to like being associated with Shouko, even though they were childhood friends, as proven time and again during the entire series. This is so until the final battle against Class A, where he risks his team’s victory by saving Shouko’s life.

Another student who has ties to Class A is bishounen Kinoshita Hideyoshi. His twin sister is Kinoshita Yuuko of Class A. Except for being a male; he is identical to his twin sister in looks. Although his studies are horrible, he has exceptional acting skills, not only being able to replicate behavior and mannerism but voices of others as well. Yuuko is the total opposite of Hideyoshi. While he is calm, and easy-going, she is prideful, arrogant and easily angered. 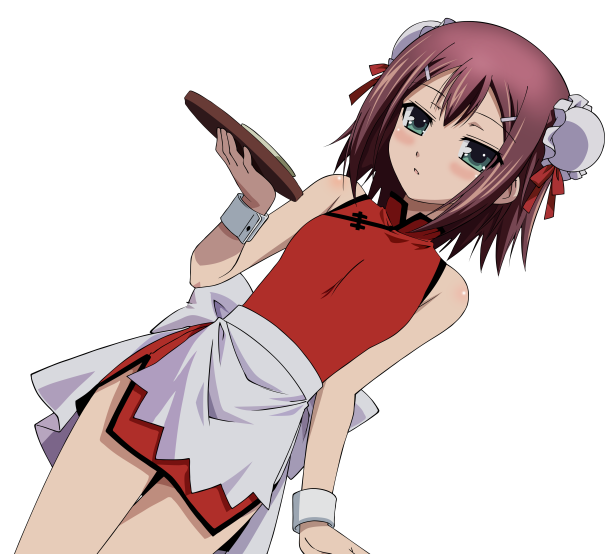 During the final class wars, where Class F waged war against Class A, Yuuko devised a plan to weaken their opponents by using other classes’ strengths. Hideyoshi pretended to be his sister and branded the entire Class C as filthy pigs. Thus, the seeds of discord were sown between classes A and C.

Class F has an infamous pervert, who is nicknamed Mutsurini (a parody on Mussolini) for his taciturn personality. Even though his lechery knows no bounds, no one, including the girls, seems to mind him being around as they think him harmless. He is a hopeless study but excels in physical education, proven when he alone brought in the win for his class against Class B (or C?).

Mutsurini bleeding internally after one too many panties flash at him

During the final battle, Class F weakens Class A by getting the lower classes to participate in a mock war against the élite class. By the time it came to the real thing, Class A was quite weak from that, as no substitute exams can be taken for a mock war to up one’s powers. However, things take a turn for the worse after Akihisa uses his Summon Being, which is the only being able to touch physical objects and has immense strength, to break down the school’s bell. The bell is used as a barricade for Class F going up against Shouko and Kinoshita from the rest of the members of Class A. The structure of the school begins to crumble and the battle of Class F and the two girls from Class A crashes too. Shouko falls into a bottomless pit just as Yuuji comes to her rescue, thus leaving his Summon Being open for an attack. Kinoshita, unaware of this, but sees an opened Yuuji, strikes him and thus wins the war of Class F against Class A.

Akihisa calls for a rematch and Shouko and Kinoshita agrees. If Class F wins, Mizuki is permitted to retake her entrance exam (thus securing her transfer to Class A where she belongs). If Class A wins, Yuuji has to sign his wedding form to Shouko.

This time, it’s a one-on-one match, the school’s smartest pegged against the stupidest – Shouko vs. Akihisa in a sudden death quiz, where every question can be the last – depending on who answers the question correctly. On the last question, Shouko botches it, amazingly giving the win to Akihisa. The question was one that Yuuji told Shouko the answer when they were children, and as she exits, he scolds her for forgetting it. She replies that she can never forget what he tells her, showing that Mutsurini had already given her the signed wedding papers earlier.

Mizuki takes the exam and obviously does very well in it. At the end of it, when she realizes she will never be in the same class as Akihisa, she begs Tetsujin/Ironman sensei to allow her to make one correction, whereby she erases her name, thus gaining her an absolute zero.

2 thoughts on “Baka to Test”