Kurokami 黒神 is a manga written and illustrated by a Korean duo: Dall-Young Lim and Sung-Woo Park.  The manga was later adapted into anime with 23 episodes, which broadcast on Jan. 2009. 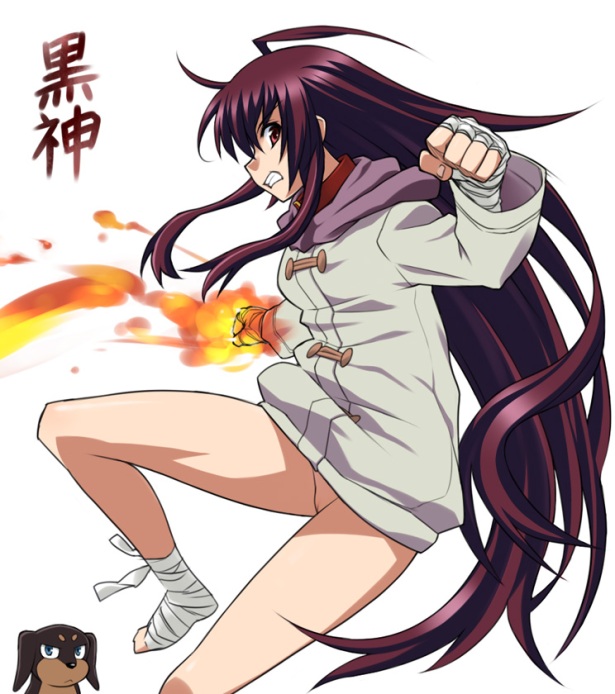 The premise of this series is based on the theory of doppelgänger. A doppelganger refers to a double of a living person. Doppelgangers are generally considered a harbinger of bad luck, an omen of death.

In Kurokami, the hypothesis of a doppelganger is applied to a doppleliner system.  There are three identical looking people existing in the same universe whose energy life force (Tera) is split amongst them. This life force/Tera is said to contribute to the amount of “luck” one has. Of the three look-alikes, two are subs and the other is a master root.  To attain a “full life force” / luck the other two subs are killed off.  In the reverse case, where a master root is killed off by a sub, the sub who retains all of the three’s life force is called a minor root. The minor root defers from a master in that it can suck up life forces from other humans, be it subs or masters.

Tera Guardians/Motosimotamas, on the other hand, are superhumans who maintain the equilibrium of energy on earth.

The story starts off in Tokyo and moves to the island of Okinawa where superhumans/Tera Guardians/Mototsumitamas and their human masters fight a tremedously powerful Tera Guardian who plans on annihilating the world. The protagonist, Keita Ibuki (a high school student), lost his mother as a child after a chance meeting of her look-alike. He shies away from building friendships as he doesn’t know when the next person will die (as most of his friends have passed on after meeting their look-alikes).

Keita meets a Mototsumitama, Kuro, only to find out she is a princess of a Tera Guardian tribe of the East. While trying to protect her from an attack, Keita is killed in the process.  To save his life, Kuro exchanges her heart with his, thereby forming a contract with him. Unfortunately, Keita is only a sub and not a master root.  Everytime they sync their Teras, Kuro drains him of his life force, essentially giving him an expedited death sentence. As they progress, they meet other Tera Guardians and their human masters, forming an alliance to take down the strongest of them all – Reishin, Kuro’s brother. Reishin is portrayed, for the earlier part of the story, as the main antagonist. This role is soon taken over by Keita’s friend Sawamura/Daichi Kuraki after he kills Reishin. Reishin, deeply wounded by the fight with Steiner in Pure Island, was attacked by an ally who soon became the traitor (Kuraki).  I say – no body, no death.

However, it is not all as it seems. Akane Sano, Keita’s childhood friend and one who has feelings for him, is later found to be the ultimate master root. Akane finally meets her sub – Yuki Kaionji and tries to save her from Kuraki. They escape in a helipcopter, which unfortunately after a rotor malfunction crashes into the sea and immediately kills off Yuki. Kuro and Keita stayed back to slow down Kuraki who was in pursuit of Akane and Yuki. In the course, Kuraki reveals Keita’s root who slowly absorbed all of his Tera. Fending off Raiga, Kuraki’s contractor, Keita finally looses all his Tera and dies. In despair and with a new found energy, Kuro promises to continue their fight. This new energy syncs with Keita, thus resurrecting him again with Kuro’s Tera, thus forming a full Tera cycle. Keita is no longer a sub, but neither is he a root. With this new life force, the duo defeats Raiga with one fell Giga Excel swoop.

In the mean time, the Holy Land, Kuro’s tribal land of the Shishigami miraculously appears in the island.

The Tera Guardians and their contractees head out to the site to investigate and even more gather there in hopes of attaining more power. There, they meet Nam, a noblewoman who’s a recorder of history. Keita and Kuro finally catches up with Reishin only to find out he has a contractee – Akane. Even with their new found energy, the younger pair is thoroughly trounced by the older pair and is left unconscious. Nam rescues them only to reveal what she suspected earlier. Kuro is one of three masagamis – a god.

The doppleliner system was a curse from the gods against humans and the Tera Guardians after they went against the will of the gods. Reishin, knowing that his sister was cursed and subsequently killed, opted to save her instead, by trying to “kill” the gods.

Reishin and Akane take on the two awakened masagamis. When Kuro and Keita arrives at the scene, they see that the dynamic duo have vanquished the gods. Not so fast though, they rebuild using the remaining one’s body – Kuro. Kuro turns evil and starts dueling Reishin causing an irrevocable fatal outcome. Keita suddenly finds his voice to call out to her, and awakens her. Kuro expels the two gods, while Akane transfuses her Tera to Keita who syncs with Kuro, and obliterates them with a Tetra Excel!

With that, the curse is lifted. Or so they thought.

Kuro decides to leave Keita to return to her home land. Akane and Keita wed. Years later, with his dying breath as an old man, Keita performs a final sync with Kuro bidding her farewell. Kuro is seen sealed to lift the curse of the doppleliner.