Season three of Naruto Shippuden (Part II of the manga by Masashi Kishimoto) aired from April 3 to Aug. 14, 2008. It ran with a total of 18 episodes (54-71). This is a mostly filler arc (ep. 57-70) about Asuma’s past with the Twelve Guardian Ninja team. The past has caught up with the future, and the next generation wants payback.

The season has two opening themes and two ending themes.

Naruto Shippuden: Kizuna (Bonds) the movie was released on Aug. 2, 2008. Konoha Village is under attack from the Sky Country and Sasuke inadvertently helps Naruto in saving the village.

April. 3, 2008. ep. 54: Nightmare
Naruto has nightmares of the release of kyuubi. Kakashi, who is still in the hospital, informs Naruto that he has a special training program planned for him, which will make him stronger quickly.

Sai tries fitting in with the ninjas, by using nicknames (following an instructional manual for dummies on how to make friends), but angers Sakura instead by calling Ino gorgeous.

April. 17, 2008. ep. 55: Wind
Naruto begins training once Kakashi is released from the hospital. He learns he has the Wind-style element chakra. Kakashi teaches him to use his Multi-Shadow Clone jutsu to expedite training: whatever the clone learns, the original user learns too. Naruto and his clones try to slice a leaf with his wind chakra.

April. 24, 2008. ep. 56: Writhe
Naruto, unable to completely slice the leaves, approaches Asuma – a wind type user – for advice. Yamato and Asuma head out with their teams on separate missions to protect a tomb of corpses and retrieve three stolen ones. Meanwhile, four cloaked figures discuss the elimination of Leaf Village.

May. 3, 2008. ep. 57: Deprived of Eternal Sleep
Team Kakashi led by Yamato heads out to the four hidden tombs. Naruto sees something strange and gives chase. He then stumbles upon a monk-in-training from Fire Temple and presumes him to be a grave robber. A fight breaks out, but the misunderstanding is later resolved. The animosity, though, remains with the young monk – Sora. The group of ninjas and monks then travel to the Fire Temple and Naruto recognizes it from his nightmare.

Naruto watches sparring sessions between Sora and the rest of the monks, but it seems that Sora is holding back his powers. Besides that, it seems that Sora is despised and ostracized by the rest of the monks (just as he himself was when he was younger). Only the head monk, Chiriku, seems to genuinely like Sora. Naruto immediately wants to befriend him and follows Sora to a hidden cave where he watches Sora practice his wind jutsu in earnest. However, Sora doesn’t want or need friendship.  He just wants to get stronger to avenge the death of his father.

Team Kakashi, Chiriku and Sora fails to protect the coffins of the bodyguards. The tombs are robbed by enemy ninjas. Yamato speculates that the ninja plotted the theft to target someone in their team.

May. 22, 2008. ep. 60: Impermanence
Team Kakashi faces off against enemy ninja and Sora is matched up with Naruto, Sakura with Sai. The team is separated (on purpose) and Sora, unaffected by the lost of a team member, refuses to find Naruto. Naruto is then cornered by a ninja who has the ability to use all five elemental jutsu (earth, wind, fire, water and lightning). That female ninja, Fuuka, is bent on kissing Naruto.

Sai escapes Fuen and saves Sakura from an enormous spider, but not before breaking his arm in the process.

A separated Sora finds the enemy leader, Furido and realizes he is the target that Yamato had theorized about.

Danzou, the sly fox, knows he is being watched.

May. 29, 2008. ep. 61: Contact
Furido provokes Sora until he unleashes his sealed demonic arm. Furido then tells Sora of his plans to use the four corpses to “save” the Land of Fire. It truth, he wants to destroy Konoha’s “king.”

Fuuka steals Naruto’s first kiss and begins draining his chakra. When his natural chakra is sapped, Fuuka begins drawing on Kyuubi’s, which proves too powerful for her to absorb. Sora senses that Naruto is in trouble and rushes to rescue him. Yamato, Sakura and an injured Sai arrive to help Naruto but are trapped by Fudo and Fuen in an underground sand maze. The enemy retreats when Chiriku arrives with reinforcements.

June 5, 2008. ep. 62: Teammate
Team Kakashi and Asuma’s team return to Konoha after their mission. Sora temporarily replaces the injured Sai on Team 7. Naruto tries to show Sora around the village, but Sora walks away and instead trades insults, which turns into a fight with Kiba and Choji. Shikamaru and Asuma stop the fight. Asuma then tells Sora that he was once teammate – of the 12 Guardians – with Sora’s father. 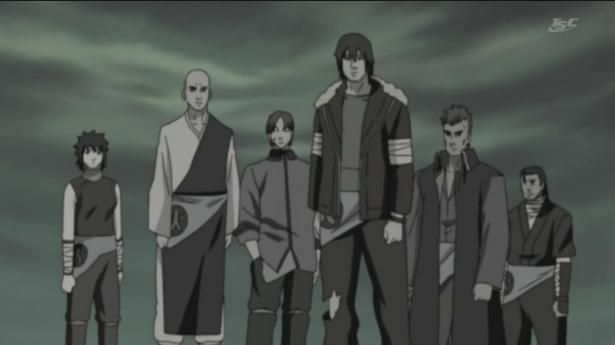 Six of the 12 Guardsmen of Fire Country

Elsewhere, Furido and his team attack the Kohaku Clan.

June 19, 2008. ep. 63: The Two Kings
Naruto and Sora train with the wind chakra under Asuma’s watchful eyes. Asuma (feeling remorse or empathy towards Sora) presents Sora with a claw made from the same materials as his chakra blades. 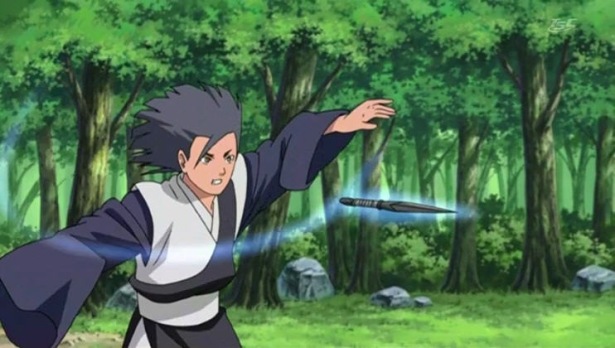 Sora training with his Wind Chakra

Furido finds Sora wandering alone in Konoha, and tells him that Asuma is the one responsible for his father’s death. Furido then passes Sora two “king” pieces from a Shogi set meant for Asuma.

Chiriku tells Tsunade and Yamato that Sora is responsible for an earlier wreckage of Temple of Fire when he went berserk. Something lives in Sora.

Danzou is found and brought in for questioning after being caught rendezvousing with a Rain ninja.

Furido then tells Sora to kill both Asuma and the Hokage (the “king”) to avenge his father. In his rage, he goes after Tsunade but is intercepted by Shizune and other ninjas. Naruto chases him down, but is stopped short when a lightning storm strikes out of nowhere, cutting of power to Konoha. The village is put on a state of emergency when four attackers seal Konoha behind a barrier. The ninjas regroup in Tsunade’s office to plot the means of protection, defense and elimination of the enemy.

While Shikamaru comes up with a resolution, Asuma is ordered to follow Sora and Naruto, and he eventually catches up with them. It hits Asuma that the invaders plan to annihilate the entire village using the lightning powers of the stolen corpses. This new information surprise Sora. Contrary to what Furido imparted with him, the target is no longer Konoha’s “king” but an entire village with its inhabitants. Sora then leaves to seek the truth from Furido. Asuma leaves Naruto with the pursuit of Sora, while he holds off the attackers. 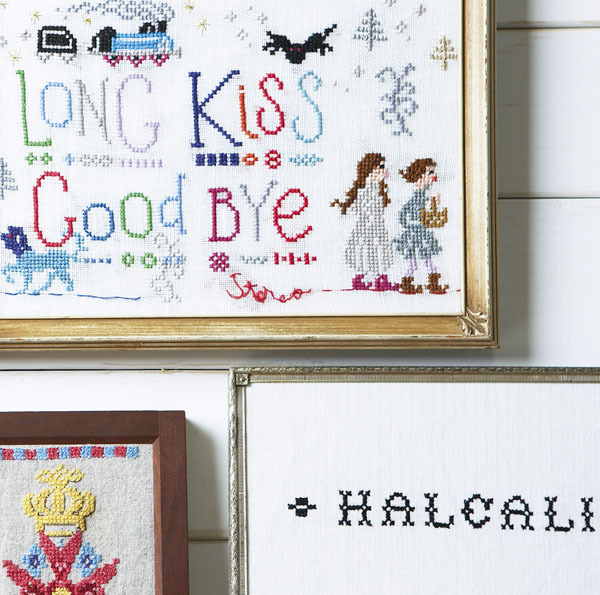 Sakura and Yamato go after three of the Guardian Ninjas while Asuma takes on Kitane. Unfortunately, Fuen tackles Sakura and Fudo engages Yamato. Naruto finally stops Sora, but is cut off by Fuuka.

Sora finally finds Furido to confront him, and Furido admits he wants to destroy Konoha village.

July 24, 2008. ep. 67: Everyone’s Struggle to the Death
Sora tries to stop Furido’s plan from succeeding despite his resentment towards Asuma and Tsunade. Furido leaves the defeated Sora, and says that Sora’s father had a similar flaw.

Kitane traps Asuma in a force field of lightning. Yamato and Sakura kill their opponents as Shikamaru finally comes up with a plan to defeat the zombies. He heads to the battlefield and puts the plan in motion but Fuen’s barrier falls and Fudo’s revival technique is quashed, thus turning the zombies to dust.

July 31, 2008. ep. 68 & 69: Moment of Awakening & Despair
Naruto, stopped by Fuuka, realizes that her secret lies in her ability to switch bodies after the use of a corresponding element and her hair preserves her youth and body. He subsequently destroys her hair, which begins taking on a life of its own and disperses the body. Naruto then finishes Fuuka off with his Rasengan.

Asuma breaks free from the electric barrier and catches up with Kitane who he defeats quickly. When Furido realizes that the revived corpses are destroyed, he switches to plan B – Sora. He releases Sora’s seal, and imparts the truth: Sora is a pseudo-Jinchuuriki who was implanted with kyuubi’s leaked chakra when it attacked Konoha 15.5 years ago.

Asuma arrives at the scene with Naruto and he recognizes Furido as Kazuma, Sora’s presumed dead father. Yamato, Sakura, Kiba, Lee, Ino, Choji and Shikamaru show up too. Sora, enraged, turns into the three-tailed form of kyuubi. Unfortunately, Yamato is unable to restrain him, as he didn’t have the First Hokage‘s necklace on him.

Aug. 7, 2008. ep. 70: Resonance
Kyuubi’s chakra rages on unchecked in Sora as the Konoha ninjas unsuccessfully try to subdue and get through to Sora. As Naruto attempts to restrain Sora, kyuubi’s chakra from Sora seeps into him and transforms him as well. Sora’s fourth tail emerges, but he momentarily regains consciousness when he sees Naruto trying to gain control of his own body by stabbing himself in the leg. This proves affective as Naruto successfully prevents kyuubi’s cloak from emerging.

Aug. 14, 2008. ep. 71: My Friend
Sai, having snuck out of the hospital, aids Asuma by binding Kazuma with his ink snake. Kazuma, however, breaks the grasp of Sai’s jutsu and charges at Asuma. Kazuma meets his demise when Asuma finally kills him.

Naruto finally gets through to Sora, who releases kyuubi’s chakra. After the incident, Sora leaves Konoha to travel the world.

Asuma plays shogi with Shikamaru and discusses who Konoha’s “king” is.

One thought on “Naruto Shippuden Season 3”