It’s a race against time for Ichigo and his friends to save Rukia from the executioner’s sword as they step into Soul Society. Ichigo (and Renji) achieves bankai and once again, gains allies in the process.

Back at the bridge outside Rukia’s cell, Yoruichi (ex-2) evades Byakuya’s (6) Senbonzakura easily with her flash moves/shunpo and escapes with Ichigo before Byakuya uses his bankai, Senbonzakura Kageyoshi. Yoruichi then begins training Ichigo to use his bankai, to increase his power before he meets Byakuya again. She summons Zangetsu using tenshintai, Urahara’s inventions. If Ichigo is able to defeat his own sword, he will be able to use his bankai, otherwise he will perish if he fails.

Elsewhere, Renji is recovering in his cell and the spirit of his zanpakutou, Zabimaru – a baboon, tells him he wants to face Ichigo’s Zangetsu again. Renji, however, tells him that Ichigo is no longer his enemy. Renji then breaks out of his cell, while Gin (3) releases his lieutenant Kira from prison. Renji finds Ichigo training and reveals that Rukia’s execution date has been moved up to the next day. Together, they both train to achieve their bankai in order to save Rukia from the executioner’s axe. Renji achieves his bankai and quickly leaves to try to stop the proceedings while Ichigo continues his training.

Hinamori Momo (5) too escapes her imprisonment and plans to confront the murderer of captain Aizen. She heads toward Hitsugaya Toushirou (10), her long time friend, and interrupts his confrontation with Gin and Kira over Aizen’s murder. Hinamori accuses Toushirou as the murderer but he knocks her unconscious and prepares to face off with Gin. As they battle, Toushirou gains the upper hand until Gin uses his shikai to threaten the unconscious Hinamori. Matsumoto Rangiku (10), Toushirou’s lieutenant, arrives in time to save her. Gin withdraws rather than face two high-ranking officials.

Hanatarou gets an earful from his captain, Unohana Retsu (4) for aiding and abetting. The 4th division is the medical sector of Gotei 13. 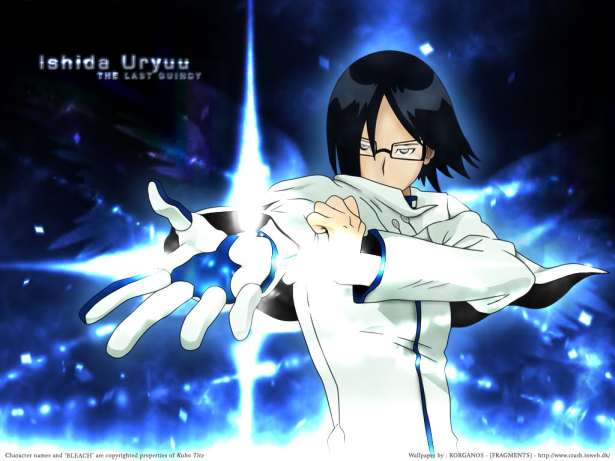 Uryuu and Inoue edge closer to Rukia’s cell by blending in with shinigami uniforms, but is watched by Kurotsuchi Mayuri captain of the 12th division. The 12th division, once headed up by Kisuke Urahara, is the research institute for the Gotei 13. Mayuri soon detonates human bombs on them, but Inoue uses her “rejection” powers/Santen Kesshun to protect Ishida and herself, to which Mayuri soon expresses his wishes to experiment on her. Uryuu goes on the offense with his bow but is quickly disabled by the paralyzing abilities of Mayuri’s zanpakutou, Ashisogi Jizou. Ishida, knowing the danger that they are in, calls out to Inoue to leave, but Mayuri is not about to loose a specimen. 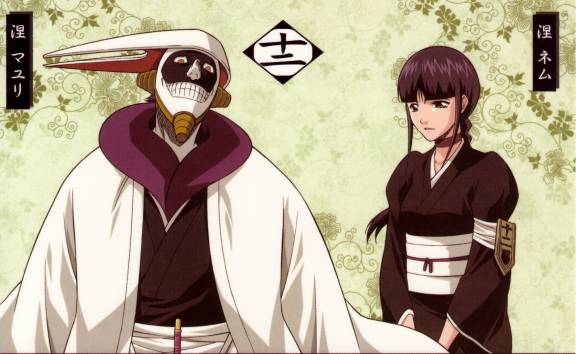 Kurotsuchi Nemu, Mayuri’s lieutenant (12) steps in to try to capture Ishida, but her good intentions back fire and is hurt in the process. Mayuri tries to turn his attention back to Uryuu, but Nemu begs for medical help. Enrage for her insubordination and insolence, he begins to stomp on her, revealing to Ishida that Nemu is a creation and therefore a daughter of Mayuri. Mayuri then tells Ishida he is not interested in the Quincy as he had had his go at his grandfather, Souken Ishida a long time ago. Now, it is Uryuu’s turn to be livid. Uryuu uses a rare and advanced Quincy technique called Ransoutengai to control his paralyzed body like a puppet. Even with that technique, he proves no match against Mayuri. Forced to fend for himself, Uryuu removes his sanrei glove, which releases the limits on his powers and absorbs the spiritons surrounding Soul Society and overwhelms Mayuri. However, Mayuri escapes by transforming into liquid. Nemu then gives a severely weakened and poisoned Ishida the anecdote to Mayuri’s poison gas, as a sign of gratitude for standing up for her against Mayuri. Stumbling towards Rukia’s cell, Ishida is confronted by Tousen Kaname, the blind captain of the 9th division. Tousen disarms Uryuu instantly and incarcerates him.

Kenpachi stumbles into Inoue and agrees to aid the invader in order to fight Ichigo again. Together with his subordinates, they travel to the execution grounds but are confronted by Komamura Sajin, 7th division captain, with the appearance of an anthropomorphic canine and Tousen (9) with their lieutenants Iba Tetsuzaemon (7) and Hisagi Shuuhei/#69 (9). Ikkaku and Yumichika (11) begin fighting Iba and Hisagi, while Tousen and Komamura attack Kenpachi. Kenpachi easily overwhelms both the captains until Tousen uses his bankai, which removes all of Kenpachi’s senses with the exception of this sense of touch. Despite being blinded, Kenpachi locates and injures Tousen but is stopped by Komamura before he is able to kill Tousen.

Renji travels to the execution grounds but meets Byakuya (6), his captain, instead. His efforts are stymied by his inexperience in handling the bankai of his zanpakutou, but his persistence and noble effort earns him Byakuya’s approval. His captain then spares him his life.

Rukia finally arrives at the execution ground, and in dejection, pleads with General Yamamoto-Genryuusai Shigekuni (1) for her friends’ lives after her passing. Yamamoto-Genryuusai is not only the captain of the 1st division, but he is also the commanding General of the Gotei 13. As the massive halberd that transforms into a phoenix is released, Ichigo arrives at the nick of time to stop the execution by halting the halberd. Sympathetic to the invaders’ cause, captains Shunsui (8) and Ukitake (13) destroy the halberd. Renji arrives in time to retrieve Rukia, while Ichigo defeats three pursuing lieutenants with his bare hands and turns to face Byakuya.

Fights erupt everywhere. Shunsui and Ukitake take on the General, while Soifon (2) takes on her former captain and teacher Yoruichi, who uses shunpo to block all of Soifon’s attacks. Despondent, Soifon breaks down and tearful asks her beloved captain why she left Soul Society without taking her. Even Ikkaku and Yumichika too joined in for the sake of fighting. Byakuya begins to fight Ichigo and promises to execute Rukia himself. Ichigo uses Getsuga Tenshou, his bankai, to defeat Byakuya’s Senbonzakura. Byakuya then releases his bankai that engulfs Ichigo with millions of tiny blades. Ichigo uses his bankai to evade the blades and stabs Byakuya instead. Byakuya then releases the second stage of bankai while Ichigo progressively grows weaker from the strain of his bankai. Ichigo’s inner hollow overtakes him and quickly overwhelms Byakuya instead. Ichigo suppresses the hollow and with the remainder of his powers strikes Byakuya. Byakuya, defeated, admits that it was not his wish to execute Rukia, but an oath to his parents that made him follow orders.

Meanwhile Toushirou (10) and his lieutenant, Matsumoto, enter the Central 46 Chambers only to find all of its occupants slain. Hinamori is also led into the chambers by Gin (3), where she is reunited with Aizen. He then impales her, and together with Gin, they both prepare to leave but is stopped by the approaching Toushirou and Matsumoto. Aizen effortlessly defeats Toushirou. Unohana (4) appears and denounces Aizen as the traitor, who quickly disseminates the information to the other squads.

Aizen informs her that every shinigami has been under the hypnosis of his zanpakutou, with the exception of his accomplices, Ichimaru Gin (3) and Tousen Kaname (9) who is blind. Aizen then arrives at Rukia’s execution site, where Tousen has brought Rukia and Renji.  A battle ensues, with Renji trying to protect Rukia unsuccessfully. Ichigo then joins in the fight but is promptly defeated. Aizen explains his reasons for betraying Soul Society but is interrupted by Komamura (7), who he too dispels. Aizen expresses his desire for the Orb of Distortion that would allow him to gain hollow powers. This Orb is hidden by Urahara (ex-12) inside Rukia, which he extracts from. After that, he orders Gin to kill Rukia, but Byakuya arrives to save his little sister. The rest of the Gotei 13 then arrives to restrain Aizen, but his party escape when hollows pull them into Hueco Mundo.

As Byakuya recovers, he explains to Rukia that after he married her sister, Hisana, Rukia was adopted into the noble Kuchiki clan as a dying wish from Hisana. However, by adopting Rukia, Byakuya broke the clan’s rules and swore to his parents to forever uphold rules regardless of the circumstances from that point forward. Byakuya admits that he was torn between following the rules and saving her. With that, Rukia remains in Soul Society while Ichigo and his friends return to the human world. 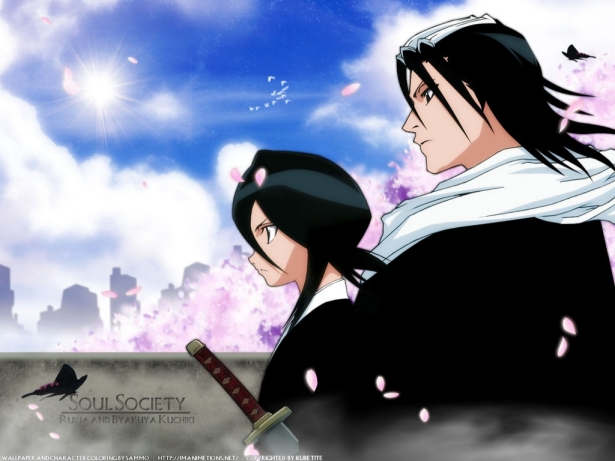 Hinamori is left in a severe mental state after being betrayed by her captain – Aizen. Kira and Shuuhei too feels the betrayal of their captains – Gin & Tousen, while Komamura (7) feels the break of trust between two good friends, Tousen (9). Division 3, 5 and 9 are thus left captainless.