Ichigo and the Shinigamis meet their first obstacles the Privaron Espada trying to rescue Orihime Inoue from Hueco Mundo. After they are defeated, Aizen’s strongest army the Espadas appear. They each push themselves to their limit and expand their powers to defeat their opponents to retrieve Inoue.

The season had one opening theme and two ending themes:

Bleach: The Diamond Dust Rebellion was released on Dec. 22, 2007. Soul Society’s artifact belonging to its King is stolen and Toushirou Hitsugaya (10) is blamed for its disappearance.

Ichigo’s battle with Dordonii forces him to use his bankai after the attack is directed at little Nel. Dordonii emits a cero blast against Ichigo, which Nel swallows and fires back at him. In reponse, Nel is attacked and Ichigo is finally forced to unleash his bankai to stop the barrage of attacks. Ichigo then dons on his hollow mask and disables Dordonii with a single blow. At the bidding of Ichigo, the adorable Nel heals Dordonii with her saliva/vomit, who immediately attacks Ichigo the moment he is healed to try to gain a seat as a full Espada. Unfortunately, he is struck down again. Grateful for Ichigo’s gallantry, Dordonii fights off the approaching Exequias (arrancars trained in eliminating intruders) sent by Szayel Aporro Granz (8) for Ichigo to retreat, and perishes in the heat of battle. His body is then taken in by Szayel for research.

Chad has his hands full with another Privaron Espada by the name of Gantenbainne Mosqueda. After a few trials and errors, Chad unleashes his full power and transforms his right arm into a giant shield called Brazo Derecha del Gigante. His sudden dominance forces Gantenbainne to unleash his zanpakutou, Dragra. Chad then transmutates his left arm, revealing Brazo Izquierda del Diablo for offense and overpowers Gantenbainne. But, Espada Nnoitra Jiruga (5) appears and easily defeats and presumably kills Chad in a single attack. Chad’s death is felt by all his friends in Hueco Mundo.

Uryuu is stuck with Privaron Espada Cirucci Thunderwitch, who blocks all his attacks easily with her zanpakutou. Pesche ends up with Uryuu and decides to help him by using his slippery saliva to trip Cirucci. Enraged, she releases her zanpakutou, Golondrina, which transforms into a giant bird with blade wings. Unable to overcome her, Uryuu pulls an energy sword, Seele Schneider, to slice off her winged blades. Uryuu leaves her after winning the battle, but the Exequias arrive, on orders of Szayel, to kill Cirucci (but not before information was withdrawn from her).

Renji (6) and Dondochakka are stopped by Espada Szayel Aporro Granz (8), the scientist of the Espada. Renji is unable to unleash Zabimaru’s bankai as the room they are in is designed to suppress it. Uryuu arrives to lend a hand to Renji but it looks like Szayel knows his strength and weaknesses too. Together, Renji and Uryuu set a trap for Szayel Aporro, ensnaring him in a massive explosion. Even though it injures him, it fails to kill. Instead, Szayel eats one of his Fracciónes to heal himself and momentarily leaves the enclosed room.

Meanwhile, Rukia encounters Espada Aaroniero Arruruerie (9) who disguises himself as Shiba Kaien (13), her lieutenant who she killed when he was eaten by a hollow. Using her guilt of Kaien’s death, he tries to trick her into killing her friends. Rukia, sensing something amiss, engages him, but the imposter has the upper hand, as he was the one who taught Rukia how to fight. Unable to mar him, Rukia uses kidou against him, and realizes that this Kaien/Aaroniero is afraid of the sunlight. She binds him with kidou and uses the rays against him, melting his face away to reveal a glass case with two masks inside. Aaroniero has a pair of infantile skull-like creatures, which float inside a glass capsule filled with red liquid. He is the last of the first-generation Espada as well as the only Gillian member of the current Espada. Aaroniero devours Hollows through his zanpakutou Glotoneria (Gluttony), giving him access to their memories, special abilities and their physical form. The reveal of Aaroniero overwhelms Rukia, enabling him to stab her in the stomach with Kaien’s zanpakutou, and breaking her zanpakutou Sode no Shirayuki in the process. 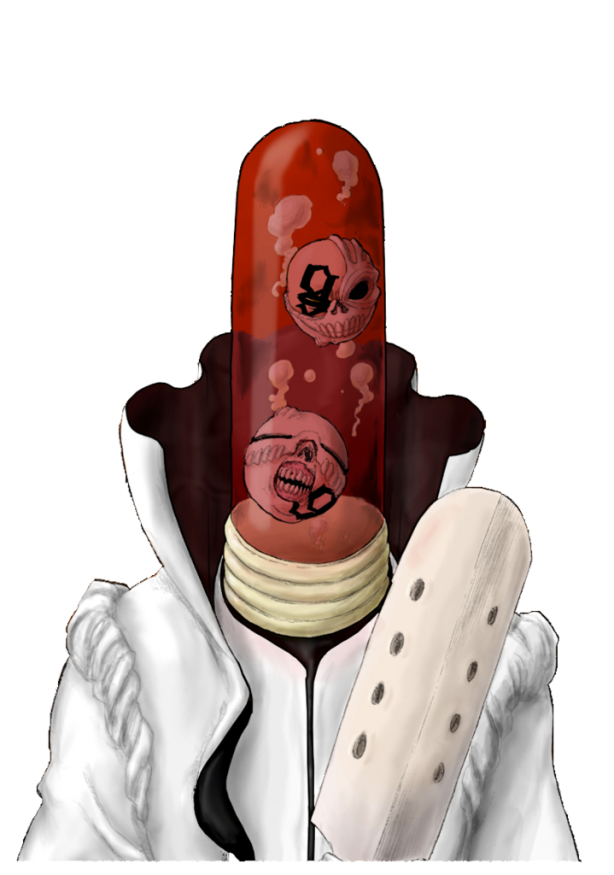 Before he kills her, however, Rukia, spurned on by memories of Kaien’s teachings, retaliates by stabbing Aaroniero through his upper skull, shattering his glass capsule and reducing the rest of his body to liquid. As he dies, broadcasting his final moments to his allies, Aaroniero’s lower skull screams for Aizen’s help whilst the upper skull merely curses Rukia, refusing to accept his defeat, before splitting in half. Rukia then collapses from her injuries.

Ulquiorra catches up to Ichigo and informs him of Rukia’s death. Ichigo is then goaded to fight with him. Even with his hollow mask donned, Ichigo is no match for Ulquiorra. He is badly injured in the process. 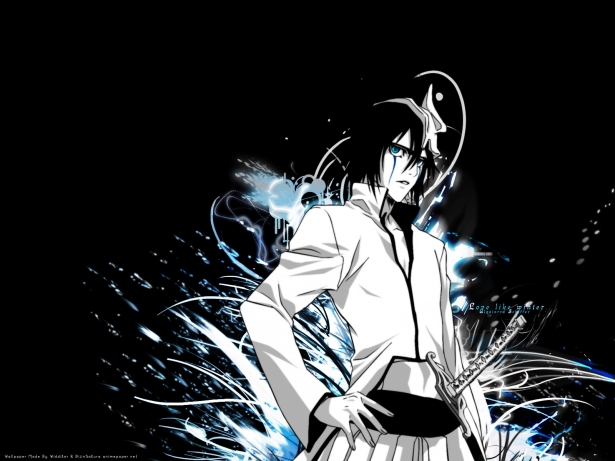 Inoue is “rescued” by Grimmjow Jeagerjaques (6) for supposedly restoring his arm, but kills her tormentors Loly and Menoly. However, she heals them before leaving with him. Grimmjow takes Inoue to Ichigo to heal him, only so that they can resume their unfinished battle from Karakura Town. Ulquiorra reappears, but Grimmjow traps him in an alternate dimension for a few hours. The moment Ichigo is healed, the battle between Grimmjow and Ichigo begins. Ichigo is outmatched against Grimmjow even with his bankai. Grimmjow even tries a sneak attack on Inoue and Nel who were watching on the sidelines, which infuriates Ichigo who then blocks the attack with his hollow mask. Pleased with the results, Grimmjow releases his zanpakutou, pantera, transforming him to his former feline character. Grimmjow has a violent lust for battle, confident of his abilities and believing himself to be equal to, or even stronger than Ulquiorra (4). His vice is pride.

Watching the battle is Espada Tia Harribel (2) and her Fracciónes Apache, Mila-Rose and Sun-Sun. Also watching it, is a frightened Inoue, having never seen Ichigo with his mask on. However, Nel reprimands her for her childish reaction towards someone who risk his life to save her. Ichigo then deals a fatal blow on Grimmjow’s chest. Slipping in and out of consciousness, Grimmjow recalls better times with his former Fracciónes: Shawlong Qufang, Edorad Leones, Ilfort Grantz (also brother to Szayel), Nakeem Greendina and D-Roy Linker. Ichigo leaves the dying Grimmjow and prepares to take Inoue from Las Noches.