What do you do when you owe yourself a little time off… three months ago? You take it three months later. Three hours away from home. For three days.

As we worked our way through the work week, we were looking forward to our much-needed time off in Providence, RI. What’s in Providence? Nothing. Well, almost nothing.

The city is called the “Creative Capital.” That means lots of museum, parks and artsy-fartsy makings. (Cheh says, “That just means gay town.”) Nice relaxing time. OR we can always head to Foxwoods or Mohegan Suns in CT, or New London for seafood. Or sit in our hotel room with Jess and just veg out. There are endless possibilities.

Providence was founded based on a belief in tolerance, liberty and free will. Founding father, Roger Williams, established this city in 1636 and today, is led by openly gay Mayor David Ciciline. This city in Rhode Island boasts seven colleges and universities including Brown and Rhode Island School of Design (RISD), and speaks of an eclectic arts scene and acclaimed restaurants.

We almost didn’t make it to Providence, as I found out that parts of it was flooded by rain a few days back. I called the hotel the day of to check.

“Is Warwick flooded?” I asked.

“What do you mean not really? It either is or isn’t. I’m not driving up three hours just to turn back.”

The clerk quickly change her story to, “It’s not.”

Upon arriving at our hotel in Warwick, we stopped for lunch at a recommended “local” eatery – Chelo’s, which turned out to be a chain store. Hubs had his favorite clam chowder, for a-daylight-robbery-price-of $6 a small bowl. He had tuna melt while I had a turkey wrap, minus the bacon – an all-round-American fare. We were stuffed to our gills with gallons of foreign oils, mayo and fat food. This was supposed to be a cheap sandwich place, but we ended up paying almost $30 for lunch. I don’t know about you, but $30 is not cheap to me. I come from a place where you can be feed for less than $3 a meal. Okay, maybe $5.

Then we packed the kid into the car and headed to Providence, a 15-minute ride away from our hotel on Post Road by the T.F. Green Airport. First stop, Thayer Street / College Hill. Brings back memories of college town flooded with college kids, except the college kids today and at this town are a little different. There were the usual tall, white college kid. And then, there were the pink-haired, pink tights with black painted fingernails students. I guess having Brown University and RISD right next to each other ensures the different landscape.

Jessie was very excited to be out in the crowd, in a different city. She wanted to smell every hydrant and garbage bin, and even climb every stair she saw (like the ones at home). Soon enough, I became her anchor that slowed her down as she began dragging me around town. I had a serious arm exercise playing tug of war with her. 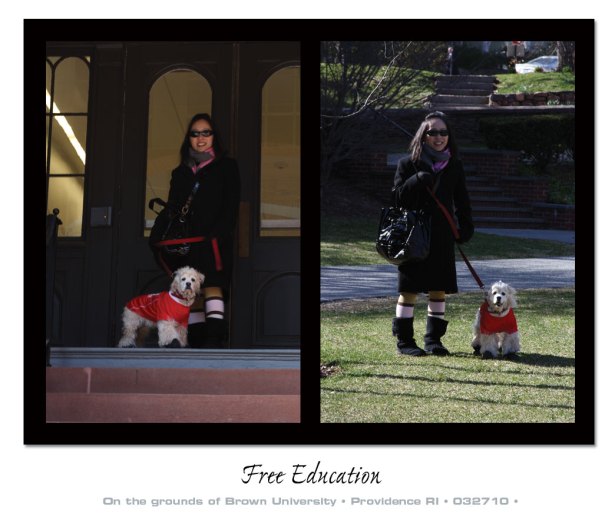 After walking up and down the street, and not knowing where to go next, we left Thayer Street. Jess went straight to “bed” once we were back in the car, having just had a workout with me holding her back. 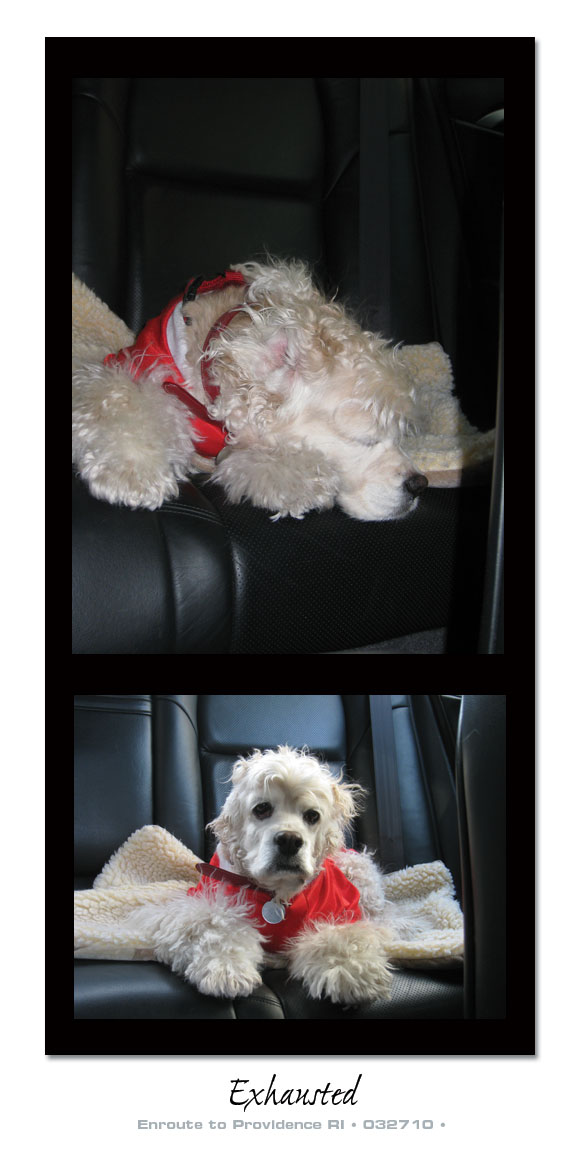 After that stop in College Hill, we drove around the city to find our next “inspiration.” For a weekend, the town was certainly quiet and deserted. The flood must have washed them away. 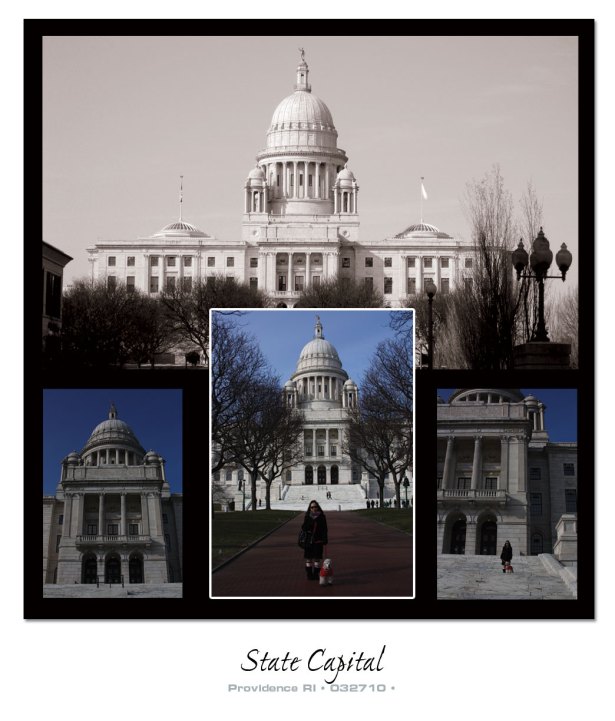 As we drove around the area, we found the State Capital building and a huge rally going on there – the Tea Party rally for/against(?) Congressman Mark ZaccaRIa / Peter Lynch. (Have yet to find anything online about that rally on that day on the Capital. And yet, it did happen) It was starting to get chilly with the sun going down. We adorned Jessie in her Liverpool jersey again, and she perked up immediately when she realized we were going out again. After the walk up and down the capital building we decided that we should call it a day, even though it wasn’t even 6 pm yet.

We roved around Main & Hope Street and decided on take-out dinner at Sawadee Thai on 93 Hope Street for $30. Dinner for the price of lunch. Our feast consisted of green curry chicken, spicy basil tofu and chicken pad thai. Funny thing, we had to pay for rice. This is a first, having to pay for rice, and because there wasn’t a fridge in the room, we were “forced” to finish our food or waste it. Waste not want not.

As stated earlier, Providence is well-known for its flourishing artscape. It also houses the country’s best art school RISD and RISD’s Museum of Art. This art museum holds more than 80,000 works of art, from Greek busts to French Impressionist paintings, ancient Asian art to contemporary multimedia art. They carry works from American artists to renown painters like Cezanne, Renoir and Monet. The RISD museum is located at 224 Benefit Street just blocks from Brown University and Main Street. Sunday’s admission into the gallery from 10am-1pm is free.

Some of the art pieces shouldn’t have been in there. But, it killed 2 hours of our day. And it was free. Beggars aren’t choosers.

Providence has allocated an “Art and Entertainment District” around Eddy Street vicinity, offering tax incentives to artists who live and work in the area. This area has galleries and performance spaces, thus transforming it to a hip destination.

We headed to Eddy street for Oop! Stuff, a trinket/gallery store, after the museum, but they weren’t open until 12. If I didn’t mention it before, here it is again. The town was dead. There wasn’t a soul around. Weird. 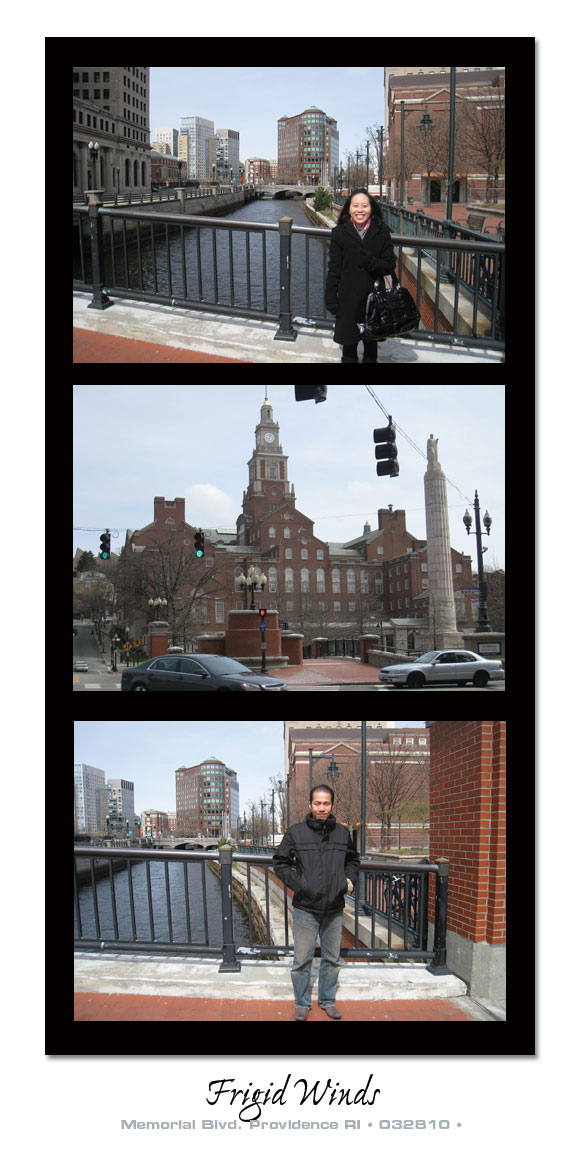 Since nothing was open, and we didn’t want to stand out in the cold for another 15 minutes waiting for the stores to open, we took the cold hike back to Main Street, to get to Hemenway’s for an early lunch. 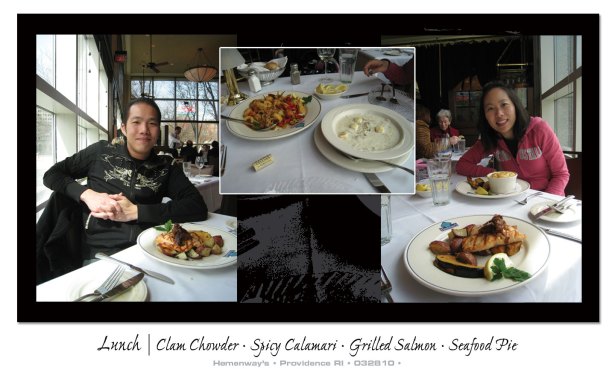 At Hemenway‘s on 121 South Main Street, we ordered from the prix fix menu of $69. We had an appetizer of calamari with fried spicy jalapeño peppers – Rhode Island style, New England’s famous clam chowder soup, garden salad with honey-curried dressing, a baked lobster/shrimp/scallop/tilapia pie with a side of baked sweet squash, and seared salmon topped with glazed onions with potatoes and squash on the side. We also got a bottle of Stone Cellars Beringer Pinot Grigio together with our meal, which we took to go after. Hubs commented that we just spent on one meal what we usually spend on a week’s worth of food. Not that we are cheap. Just very frugal and we like to eat in. Maybe just a little cheap.

After our very filling lunch, we walked back to Benefit Street, where the car was parked atop a hill. After that cold and strenuous walk back, I think lunch was burnt. Hunger struck soon after. I think I have worms.

Next stop, Heir Gallery. Tell me, how many Heir Galleries do you think there are in a small city like Providence? Three it seems. We went into the first one on Eddy street. Very disappointing. Unbeknown to us, this was the same area as the Oop! Stuff store that we left earlier when the shops weren’t open. So we headed back to that store after seeing the store there.

Nothing fancy.
Everything was pricey.
For nothing but chotskies.
So we left.
Disappointed.
But took a stroll around the neighborhood.

We actually bumped into the “real” Heir Gallery on 231 Westminster Street!  What a difference!  THIS was where we wanted to go to.  Very nice indeed. Even met the owner to the gallery – Tyler Doran of Heir Antiques.  A little interior design, a little fashion design, a little antique but plenty of art.

Our last stop on that street was Craftland. Nice shop to visit for Providence’s Buy Art program. I complained that we were going to leave Providence with nothing to show for – but we ended up with two pieces of artwork. Happy, we headed back to the hotel in Warwick to relief Jess and to take her out for her walk on Gano Street’s park.

This time, she had on a thicker jersey as the temperature was really dropping, with the forecasted rain the next day. 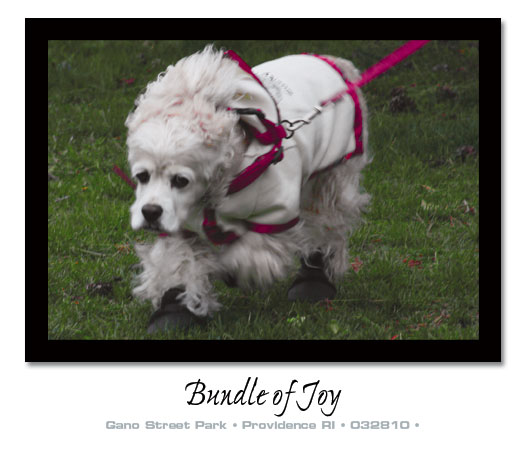 We got dinner from 4 Season on 361 Reservoir Avenue after. It turned out to be a Vietnamese, Thai and Chinese restaurant, which came highly recommended online. We ordered from the “special menu” a salted tilapia with fried chillies, Szechuan minced pork, mushroom and shrimp with noodles and spicy eggplant, mushroom and tofu dish. Of course we ordered too much! But this time we didn’t try to finish it. We just turned up the a/c in the room. I must say, the food was alright – above average. However, the best dish wasn’t from the special menu, but from their “normal” menu – the spicy eggplant, mushroom and tofu.

The plan was to head to Warwick Art Museum on 3259 Post Road, but I refused to budge from my pretend slumber. For once, my laziness paid off. Since we didn’t visit the museum, we left for home earlier than expected. Our three-hour ride almost doubled in time with the torrential downpour and added weekday traffic. By the time we reached home, we were thoroughly wasted and hungry, since we never stopped for lunch. What we stopped for was one bathroom break and an ice cream for hubs and yogurt for me at McDonalds. That tied us over for a bit.

When we got home, we unpacked immediately, brushed and bathed Jess, swept the floor and did two loads of laundry. Sounds grueling, but it’s so that we can relax the day after and prepare for work the following day. There’s an old Malay saying, “Berakit-rakit ke hulu, berenang-renang ke tepian; bersusah-susah dahulu, bersenang-senang kemudian.” Strive hard now, reap the rewards later.

After we battled the rain and traffic home on Monday, Warwick did indeed become flooded a day later. We got in and out just in time, but the poor folks there were drowned in a historic flood that has not happened for more than 200 years. Easter weekend will not be pretty.

One thought on “Get-a-way”