My day started much like every other day, with Jessie scratching the bed rousing me from sleep. Except not only do I have the day off, but it was 6 in the morning. I mumbled something unintelligible and got her to settle back in to bed again. An hour later, she stood on her hind legs again and scratched the bed.

To any other person, it’s just another day. But today, it’s my birthday. King for one day.

Nothing really special, if you think about it. But, for my family, birthdays are special.

Just the night before, my father had called right at my birth hour. My mom was complaining that my father is such a stickler for such “nonsense.” I thought it was very sweet.

My father would like to tell me that when I was born, I cried and cried for hours. It was only AFTER they allowed him to carry me, that I quieted down and went to sleep. The moment they pried me away from him, I stirred and began my weeping again. He had no choice but to leave. Hospital policy. When he returned the next morning, I had lost my voice from crying all night and was hiccupping, gasping for air. Once in his arms again, I was knocked out cold.

That was me. A cry baby. Needing constant supervision and a familiar face.

So, my younger sister, who left the Big Apple for the Hogtown in September returned. The wind of change blew mildly. But it ushered her back at least for a little while.

We had a roaring good time at dinner, in Montclair at Palazzo‘s.

Luckily, they smartly sat us at the back of the room. And we were earlier than the usual dinner crowd. We were loud, to say the least.

We even laughed at the poor waiter. He was trying to tell us the “specials” for the day, but his sedated speech brought a yawn out from my younger sister. When he stopped, not paused, the girls said in unison, “Thank you.” We thought it was the end. Prompted by that, he continued his sluggish drone. I guess dinner didn’t start and stop with a portabella mushroom. When he left, we just cracked up. Turns out, the specials were all in the menu and we didn’t need to be told.

FYI, we can read. Pretty well.

It didn’t matter that it took us some time to decide on our order. We just had a swell time thinking about what we wanted to eat. In the end, after much back and forth, DC ordered the duck with risotto, but changed when the yawner told us the duck would take an extra 25 minutes to prep. Salmon it is then. My younger sister had wheat fettuccine with artichoke and sun-dried tomatoes. (The sun-dried tomatoes had to be set aside, for later, as they were too sour for her canker sores.) Hubs had seafood pasta and I ordered the Ahi Tuna with asparagus and shrimp risotto. Food was awesome. Company was even better.

By the time the restaurant filled up, we were the only ones creating the “atmosphere” for the restaurant. We were regaling each other with our tales of different members of our family, especially of our deaf grandfather. I called my grandfather once. Throughout the conversation, he kept addressing me as my younger cousin sister in Canada. In the end, I just assumed the identity of my cousin. Much easier that way.

Then there was the impersonation of Russell Peters. “Russell!” his father would call out in his Indian accent. “Somebody’s gonna get hurt!”

Can’t wait for his Green Card tour on January 29th, 2011. My younger sister will have to try to make it down that weekend.

The night ended with cake. It was a mango mousse cake that DC said the bakery shop worker was so entranced with her that he gave her a discount for the cake. Will let her think what she wants. 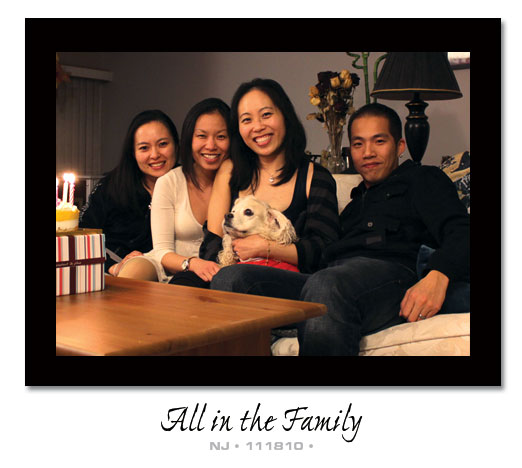 But that’s not the end of the story.

I still have a Christmas tree to put up. (Yes, kiasu-ism is alive and well in this household.)

And our eating continues into the weekend, where we will be trying out vegetarian cuisine at Buddha Bodai, but not before watching Harry Potter. Thanks to a canker sore, we skipped the vegetarian food in the city, but headed for Japanese buffet right outside the Kerosotes theater.