I was exhausted to the core but sleep never came…for 4 days.

After learning that my grandfather passed away on Thursday, Jan. 6, 2010, DC and I frantically scrambled to return home to Malaysia. We got the first flight out off JFK on Friday, transited in Japan on Saturday, and finally reached KL on Sunday night. The rest of the family from Canada flew out late Saturday and arrived Monday.

After an emotionally draining day on Thursday, I crawled into bed in the wee hours of the morning hoping to catch some shut-eye before taking the flight out. Sandman never visited.

Thanks to the impending snowstorm on Friday, we headed out early to the airport. We then sat in the airport for 4 hours before boarding the plane. With time on our hands, we managed to get ourselves exit seats with extra leg room. That did not help. The flight into Japan was sleepless. We tried to lull ourselves into slumber, but it was impossible. We were fed, watered, and entertained. But rest eluded us. By the time we landed in Narita Airport, we were walking zombies.

We were shuttled to Hotel Nikko for the transit, and thought that this layover was a blessing in disguise. We would finally get our rest.

We showered and had dinner at 6, buying food from a convenient store aptly located in the hotel (instead of heading into Tokyo for a quick run in town). When 8 pm rolled around, our bodies just couldn’t handle it anymore. We crashed. I woke up 3 hours later and begin watching Japanese TV, which I couldn’t figure out when programming ended and advertisement started.

My grandfather, Kong-Kong, the patriarch of the Phoas, had been slowly withdrawing himself from the family. I last saw him in December 2009 when we returned to KL for my younger sister’s wedding, which he never attended. My younger sister has always been the apple of both my grandparents’ eyes. For him not to attend her wedding, must have devastated him. During DC’s recent visit home, just one month back, she saw an emaciated Kong-Kong. He, she said, had given up on living. And during their, what is now, final talk he told her that it truly saddened him that he never made it to both his grandchildren’s wedding (both mine and my younger sister’s). He just didn’t want to “spoil the evening” for anyone. He was, ever so effectively, withdrawing himself away from his family. Even worse, was his lost of teeth. He refused food and eventually water, until he fell Christmas Day.

My parents, after much reasoning and persuasion, got him to the hospital, where he also refused treatment. But after my uncles visited, and through much restrain and force-feeding, he became well enough to be discharged. During his admittance in the hospital, he began asking for his family: the first-born grandson, his youngest son, Uncle Tak, and eventually my younger sister. During this time, my mom got the silent treatment from Kong-Kong. All those times of bringing him food daily, and rushing off without time to chat, suddenly became her onus to bear. She didn’t have time to talk before. But now she just wanted him to talk to her. Even a scolding would be music to the ears. Worse yet, my mom felt terrible ill will all the trips and time spent in the hospital. Even my dad was depleted.

My parents brought Kong-Kong home on Wednesday Jan. 5, 2010. My first uncle, Peh Leh, began taking over the cares of Kong-Kong, since they were unable to find a maid for him on such short notice. However, looking after a sickly elderly man was no easy matter, as they soon found out. The children decided that he needed to be a nursing home that is better equipped to care for him. The next morning, after daddy made some juice for Kong-Kong, mummy walked it over to feed him and to tell him of the decision. But upon entering, Kong-Kong smiled his first genuine smile to mummy. She didn’t have the heart to tell him of their decision after that. Seeing that, the two oldest siblings decided that putting him in a nursing home is not an option at all.

She returned home and went out again for the next feeding. But upon seeing Peh Leh feeding Kong-Kong, she left. She reached home in time to receive the call from Peh Leh that Kong-Kong passed away at 6:20 pm. My weary mom and Peh Leh were the last people to see and speak to Kong-Kong.

He could not wait for the return of this first-born grandson, his daughters, my uncle, nor my younger sister. He tried, but suffocated.

DC and I reached KL on Sunday. We reached home, with my father waiting for us for a quick bite before taking us to the wake. We pulled into the funeral parlor just as the night service ended and the guests, mainly of extended family, viewed Kong-Kong’s body. DC and I rushed up to the guests, as we embraced a sobbing mummy. We were then ushered over to view Kong-Kong’s body. I know DC had told be how skinny Kong-Kong were on his last days. But the sight of him still managed to surprise me. Lying in the coffin was a gaunt, bald man, who looked nothing like the grandfather I remembered.

Over the years, we may not have been the best of children/grandchildren to Kong-Kong. As with everything else, we are always too busy for anyone but ourselves. However, in times like this, we gather again and show our strength and unity as a family. We gather to pay our final respects. We gather to support the living.

Kong-Kong’s living siblings, nieces and nephews, children and grandchildren gathered for days on end, holding vigils in his honor. The wake went on for 3 days. On the fourth day, a service was held with eulogies given by my youngest uncle (representing the siblings) and my DC (the oldest of the grandchildren), before he was cremated. On the fifth day, the family returned to the crematorium to gather the bones into an urn to be put in a columbarium in Shah Alam. His remaining ashes were scattered in the sea, as per his wishes. 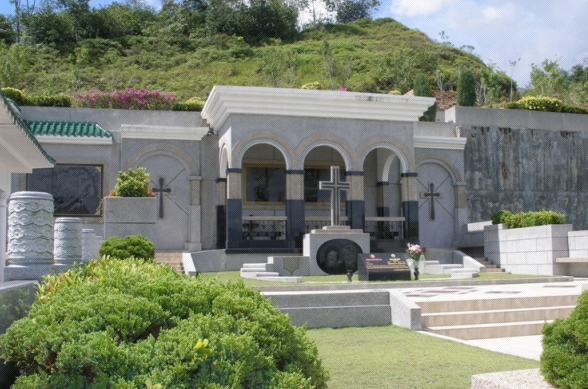 As with many things, we rue our actions after the fact. However, our biggest regret is not truly knowing this man we call Kong-Kong. It was after his death, cleaning out his things, that we finally learned about him. He was a man who took the blame for his son’s death, but never told anyone of his own grief in losing him. He was a man who could scare his own children with just his voice, but would allow his precious granddaughter to shut off his TV just to watch her sing and dance for him. He was a man who was hard to love, but truly loved Popo (grandma). When he received my Thank You card for my wedding in remembrance of Popo, he cried while while calling her a “dear and wonderful woman.” He was not one to overtly show his love, but on his very last days he showed his tremendous love of my mom. He proudly pointed to my father and told my mom, she was a lucky woman. He then proceeded to gently caress and cup her face in his hand. He was a brilliant man, who detested to be a burden to anyone. He cherished all the letters, cards and photos sent to him by his children and grandchildren by carefully dating, storing and protecting them. Those were his reminders of his family. Those are now our memories of him.