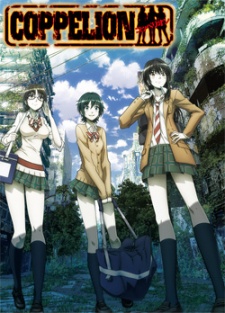 Coppelion (コッペリオン) is an action, sci-fi, seinen manga series written and illustrated by Tomonori Inoue. The anime adaption of the series will air on October 2, 2013 and simulcasted in Asia on Animax Asia on the same day.

In 2016 a meltdown of a nuclear power plant in Odaiba creates a big contamination catastrophe in Tokyo. 20 years later, the Self Defense forces dispatch 3 genetically engineered girls from the special unit Coppelion to search for survivors.

(This anime was green-lighted since 2010, but due to the unfortunate Fukushima Daiichi nuclear disaster, the anime production was put on hold until now).