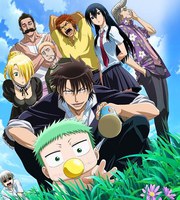 Beelzebub (べるぜバブ Beruzebabu) is a manga written and illustrated by Ryūhei Tamura. It was first published in Weekly Shōnen Jump’s 2008 volume 37-38, then serialized in 2009 and is ongoing. An OVA was announced in July 2010, while the anime adaptation by Studio Pierrot aired from January 9, 2011 (Sunday) with a scheduled 12 episodes.

The story is an action-packed, supernatural, comedic series starring protagonist Tatsumi Oga, the “strongest juvenile delinquent” in a school filled with delinquent.

During a trouncing of thugs by Oga at the riverbank, he finds a man (a transporter between worlds) floating down a river and pulls him to shore. The man promptly splits in half and a baby boy emerges. The baby is the son of the Great Demon King who the transporter, Alain Delon, has chosen based on his prowess as an “evil” human. Later, Baby Beel chooses Tatsumi as his guardian and care giver when the heir to hell’s maid, Hildegarde, comes to retrieve him. It then becomes Tatsumi’s quest to find a replacement caregiver for baby Beel. But first, he has to find someone from school more evil and stronger than him.

Watched the premier episode in Japan with no clue what it was, but found it extremely interesting and adorable. Didn’t realize that these new series are aired at the weirdest hours, most likely for insomniacs. Definitely will continue with the series.
END_OF_DOCUMENT_TOKEN_TO_BE_REPLACED 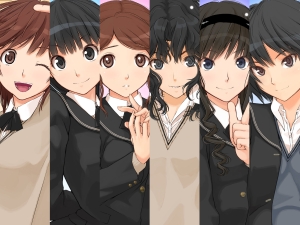 Opening and ending themes are:

Tachibana Junichi, a second-year high school boy, is put in an uneasy situation during Christmas due to a past incident. This Christmas will be his last chance to ask out a graduating senior Morishima Haruka, a popular senior student with many adoring fans.

OR he can ask out one of several other classmates. There is class representative Ayatsuji Tsukasa, a seemingly kind and friendly hard worker but is really a manipulative and cunning person. There is Sakurai Rihoko, a girl with a huge appetite, Tanamachi Kaoru his childhood friend, Nakata Sae and Nanasaki Ai.

Pick any or pick all, what’s there to lose? A guy can only wish.
END_OF_DOCUMENT_TOKEN_TO_BE_REPLACED

Arakawa Under the Bridge

Arakawa Under the Bridge (荒川アンダー ザ ブリッジ) is a manga series written and illustrated by Nakamura Hikaru since December 2004. It has since been adapted to anime and is scheduled to air from April 4 to June 27, 2010. The series has been renewed for a second season in Fall of 2010.

It has an opening and ending theme:

Ichinomiya Kou, has only one rule in life, “Never be indebted to anyone.”  He lives by this rule until he almost drowns from an accident. He is rescued by a strange girl who believes she is an alien living under a bridge. She refuses his money to repay his debt, but instead, asks to be his lover. Unable to reject this request, Kou/Ric (his new name short for Recruit) begins his new life under a bridge and meets weird individuals who later are known as “denpasan” – for people living under the bridge.

The humor is dry, but the message hits home. The characters are weirdly interesting and the anime is very much priceless.
END_OF_DOCUMENT_TOKEN_TO_BE_REPLACED